This week illumineX shipped an all-new version of EyeSpy to the Mac App Store. Remember the fun little toy where cartoon eyes watch your mouse cursor as it move around the screen? The concept goes back to the earliest days of graphical windowing computer systems, at least as early as 1986. We made our first version of a toy like this on the first developer pre-release version of Mac OS X many Moons ago (in turn it was based on a version that one of our team had built on NeXTSTEP in the 1990s). This week we released a brand new version built in Apple's Swift programming language and taking advantage of modern Cocoa API including SpriteKit and CoreAnimation.

Working with Alex Cone of CodeFab, we did more than bring EyeSpy up to date. We started from scratch, by asking what makes EyeSpy so much fun that people keep asking for an update, over 15 years after the first (and until now, only) release?

Our teams have collective many decades of experience helping our clients ask questions like this about their markets. We decided to apply our enterprise software solutions practices to the very simplest toy in our collection of software and see what happens. The result is born as the brand new EyeSpy, available on the Mac App Store for the first time, and bringing you fun original cartoon artwork by a variety of professional artists.

We've introduced a variety of subtle features to make the simple toy feel playful and fun. A free download, EyeSpy is a pleasant distraction, like playing with a rubber band while talking on the phone. (Try grabbing the cartoon character and throwing it off the edge of your screen.)

After you download EyeSpy, simply double-click the EyeSpy Guy character to open the Character Settings panel. Click the "Characters" pop-up button, where you can select a character from your list, download additional free characters, and purchase characters from the integrated In-App Purchase Store.

One of the new twists on EyeSpy is a variety of fun new cartoon characters, which you can easily share with your friends from inside the EyeSpy app. You can freely share any of your EyeSpy characters using Twitter, Facebook, Messages, Mail, and any other social media sharing service supported by macOS (Sierra).

The new EyeSpy is silly and fun. You can't make us take it more seriously than we already do.

illumineX has worked with Alex Cone, founder and CEO of New York City based CodeFab , on a variety of commercial/consumer and enterprise projects since he and illumineX founder Gary Longsine first met at the last NeXTSTEP Expo in San Francisco, back when we were puppies! We've been friends and colleagues ever since. Over the years we've collaborated on a wide variety of projects from consumer software like EyeSpy, to scalable enterprise network security software (FireBreak by Intrinsic Security) to an energy commodity market trading system which manages a non-trivial fraction of the global economy (Royal Bank of Scotland - RBS).

illumineX and CodeFab are available to help your enterprise, government, or non-profit organization build new mobile, desktop, and cloud solutions.

Be sure to download and play with EyeSpy. The App Store is our resume. 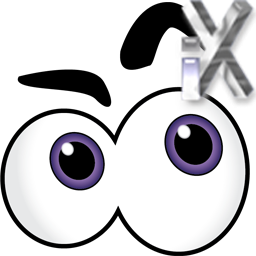